Adapting to change – a presentation by James Chaplin

Adapting to change – a presentation by James Chaplin 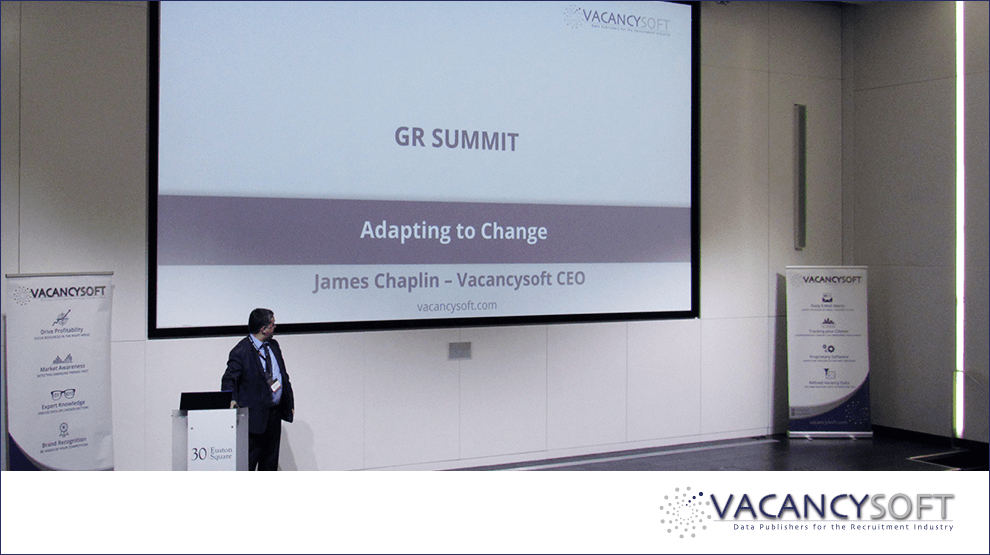 Vacancysoft was proud to be, for the second year, the headline sponsor and co-host of the Global Recruiter UK Summit 2017, which was held in London at the beginning of this month. The summit offered the chance to gain a unique insight into the present and future of best practices for recruitment. It brought together industry experts and peers from across the UK and Europe for what has rapidly become regarded as a ‘’ event.

One of the widely acknowledged highlights of the summit was a presentation given by the CEO of Vacancysoft, James Chaplin, who spoke on the topic of adapting to change. James started by addressing where change is to be found, looking at the reality, the attitudes of the Millennials as a generation and the rise of AI. He then turned to where that change is manifesting itself. Here James drew the audience’s attention to the growth in recruitment as a whole and the ongoing transformation within white-collar sectors, before assessing where the hotspots are to be found. To conclude the presentation James summed up the implications for recruiters, picking out three key points for the industry to consider. The first of those was employee engagement, which is becoming ever more important. The second was regulatory change, with change, as always, bringing opportunities. The last, but by no means least, was data-driven decision making, for which James looked at the ways that data can help recruiters to optimise their businesses and maximise their results, performance reflected in a recent study by Bain & Co.

The presentation was very warmly received by the audience and became one of the major talking points both during the lunch which followed it and for the rest of the summit. If you missed the event and would like to see the handout which was given to the attendees, please contact us, we’ll be very happy to send you a copy of it.