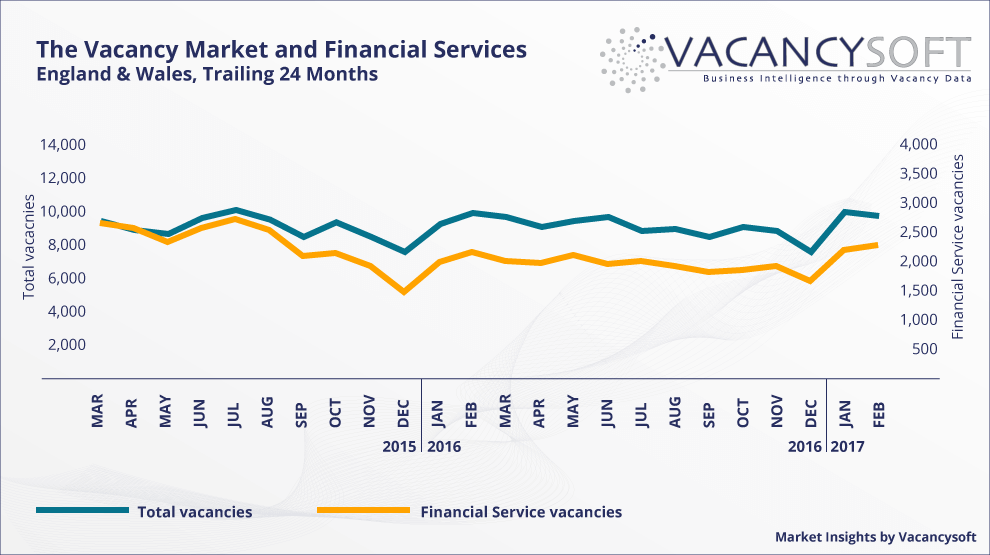 The professional vacancy market entered 2017 with a spike in activity. The volume increase from January extended into and potentially may continue March. This increase is significantly different to the post-referendum slump we saw in the second half of 2016. It should also be stressed that even the relatively busy first half of 2016 had slightly less activity than the first part of this year: the number of openings advertised in January and February in 2017 was 2.9% higher than the same months in 2016.

One hypothesis is that business leaders, after months of uncertainty, have finally returned to hiring based on current needs rather than delaying decisions until the future becomes clearer. Although the news in January about withdrawing from the single market was unfavourable for most companies, it did provide some long-awaited clarity about what to expect in the immediate future.

Financial Services, one of the industries where business leaders have expressed the most concern about the future, is seeing an uptick in vacancy activity that is proportionately even more significant than that of the overall market. February 2017, usually a slower month, saw more openings in Financial Services than January 2017. It was an 18-month high point in our data: one has to go back to August 2015 to find more openings advertised in a single month.

Statistics released by the ONS in February for the labour market showed that employment rates are still far from falling, in they are “edging towards full capacity”. However, the same statistics show that the slowing growth in salaries is increasingly an issue: February’s rate of 1.4% was the lowest for two years. That was driven by the weakened pound and by rising and is predicted to affect living standards. The Guardian’s Larry Elliott noted that the fact that the majority of the people who entered the labour force between 2015 and 2016 were non-UK nationals has “helped to keep the lid on wage increases”. As a number of commentators have pointed out, adjusting growth in real pay to the rising costs of living should take priority during the upcoming months.

← How much would you pay for a silver bullet? Analysis of the Private Practice Regional Job Market →