Hiring and the Referendum: the Midlands’ job market still growing

Hiring and the Referendum: the Midlands’ job market still growing 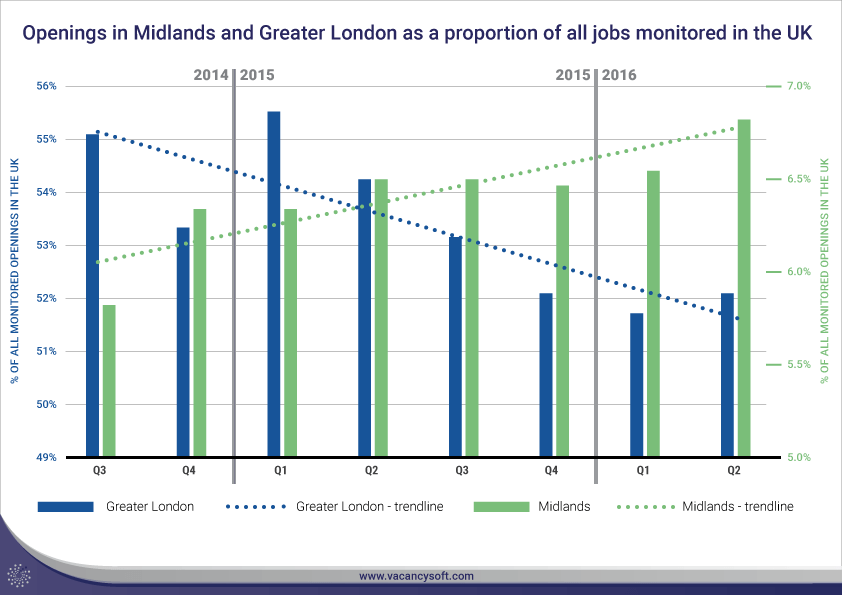 What changes will the Brexit decision bring for employment and recruiters in the Midlands? Is the way the Midlands’ job market is moving influenced by the vote to leave? What industries have most openings in and what industries might be growing in the near future?

The East and West Midlands together are a pillar of the UK’s economy, historically being the cradle of the country’s industrialisation. Between 2012 and 2013 the region’s economy grew by 4 per cent, the fastest growth in the country. In February this year, despite fears related to Brexit, the Midlands’ regional growth was still above the UK’s average. The people of the Midlands were divided evenly between in and out until the vote, when their choice helped swing the overall result. Although there were concerns about Brexit threatening growth in the Midlands, it now seems that the Midlands Engine might be key to saving the UK’s post-Brexit economy.

Comparing two regions that voted in opposite ways in the EU referendum, shows that the pro-remain region of Greater London experienced a drop that might be linked to growing referendum-related concerns. Interestingly, the pro-leave Midlands, that has a considerably smaller part in shaping the UK’s employment market, could keep their slight but steady growth of vacancies.

The busiest industries in Midlands were Financial Services (28% of all vacancies in the region) and Professional Services together with Technology, Media & Telecoms (TMT) (23% of all vacancies in the region each). However, only TMT hiring strengthened over the period. A very sharp decrease can be seen in Financial Services openings in the last quarter of 2015. Industrials have shown constant growth over last 24 months, and perhaps the Midlands Engine project will help to continue this trend.

Brexit is putting the UK’s economy at risk, but it seems that the Midlands region is prepared, and is taking the impact better than other regions.