Life Sciences in the UK

Life Sciences in the UK 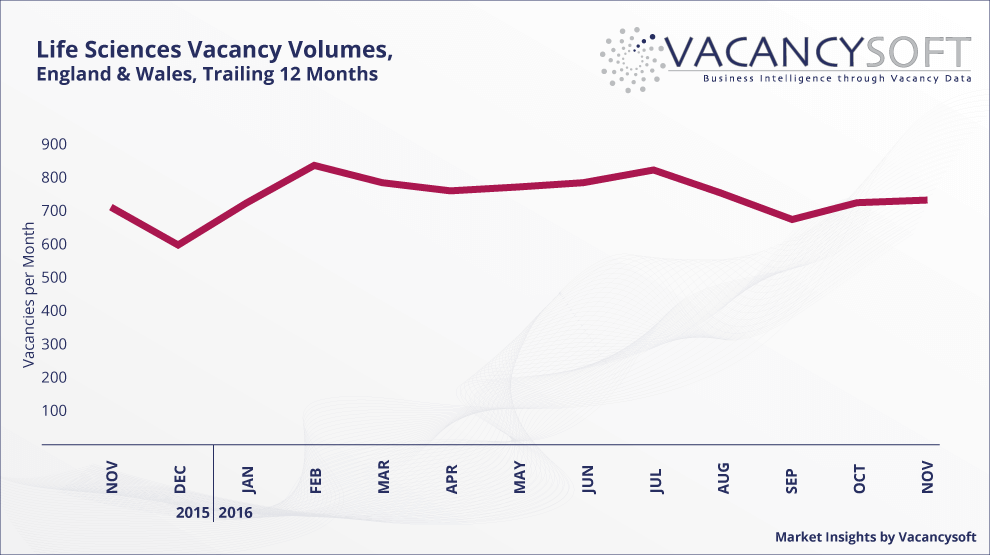 “We have one of the strongest and most dynamic life science industries in the world. The sector generates an annual turnover of £56bn and ranks top in Europe in attracting foreign direct investment.” – George Freeman, the UK’s first Minister for Life Sciences.

Considering the current technological, political, and economic turbulence, the Life Sciences industry has been changing significantly. As LSCC’s “Life sciences industry and UK analysis” report states, this has been reflected by an innovation spike in Biotechnology and Medical Technology.

Overall vacancy patterns in Life Sciences slumped from July to and rebounded following October. If hiring activity unfolds as in previous years, we would expect a temporary drop in vacancies in December.

Vacancysoft data reveals that Biotech companies posted 8% of all Life Sciences vacancies in the past 24 months. Biotech had a two-year high in vacancy volumes in October 2016, showing 58% more vacancies than the average over the period. Medical Technology accounted for 10% of all jobs in Life Sciences.

Considered as a part of the Life Sciences industry, the Pharmaceuticals sector maintains stable dominance: the sector saw 66% of all vacancies in Life Sciences.

R&D was the most advertised specialism, making up 11% of the Life Sciences jobs.

On average, 30% of all Life Science jobs are for senior professionals and management staff. The East of England and South East England were the busiest regions in the past two years, with 30% of the Life Sciences job market each.

← We are delighted to be the headline sponsor of the UK Summit 2017! Regional Trends Report - Southern England →