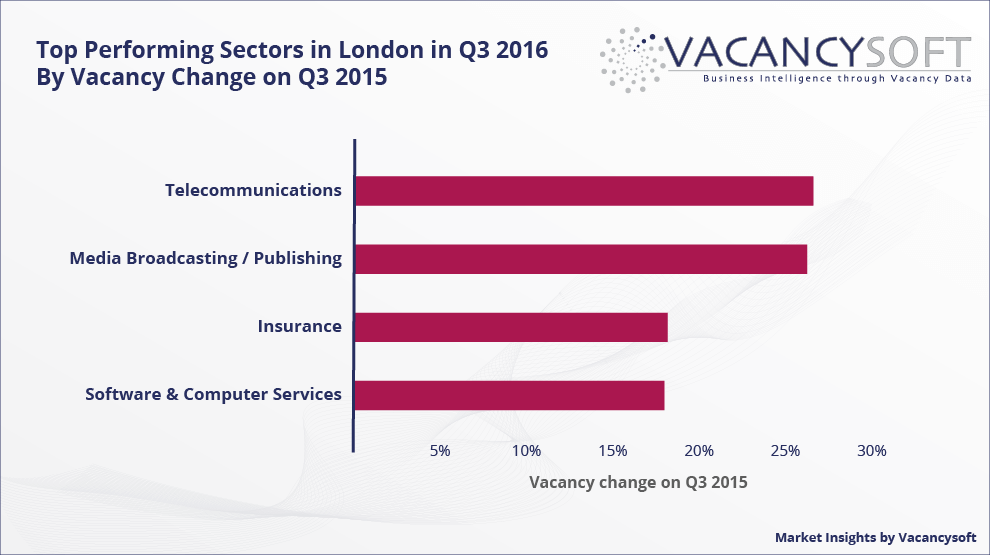 Where the immediate fall out from the referendum result has been the collapse of sterling, (now the worst performing currency this year) London faces political challenges it will need to overcome if it is to retain its status as a leading hub for Financial Services. For example, , London had been a hub for venture capital flowing into Fintech, in Q3 the deal flow has dried up where competing hubs are eyeing up the opportunity to steal market share from London.

However, economic activity in Q3 of this year was stronger than expected. Quarterly analyses from ICAEW and YouGov both pointed to the resilience of the UK economy; economists emphasize that it will take much more than a bad trade deal to diminish London’s potential.

In the professional vacancy market, Q3 closed with vacancy volumes in London 4% lower than in the same quarter last year. Despite this, vacancies in a number of sectors performed better than in Q3 2015, with over 25% more roles in Telecommunications and Media companies. September 2016 was up 5% versus last year, and it saw the highest volume of Marketing vacancies in the past two years.

The future remains unclear. London & Capital, in its Q3 summary, flags Brexit as a key concern for the global economy, with the potential of triggering a domino effect that dismantles the Eurozone. London’s status as a leading global city will definitely be impacted if Brexit results in losing single market access or limiting the movement of people. This will cause international businesses to begin withdrawing from Britain.

Such a turn of events grows more likely should the government and the EU end up implementing a “hard Brexit”. that would constitute such a threat to London, that a rearguard action is already starting to ensure the city retains its global status.