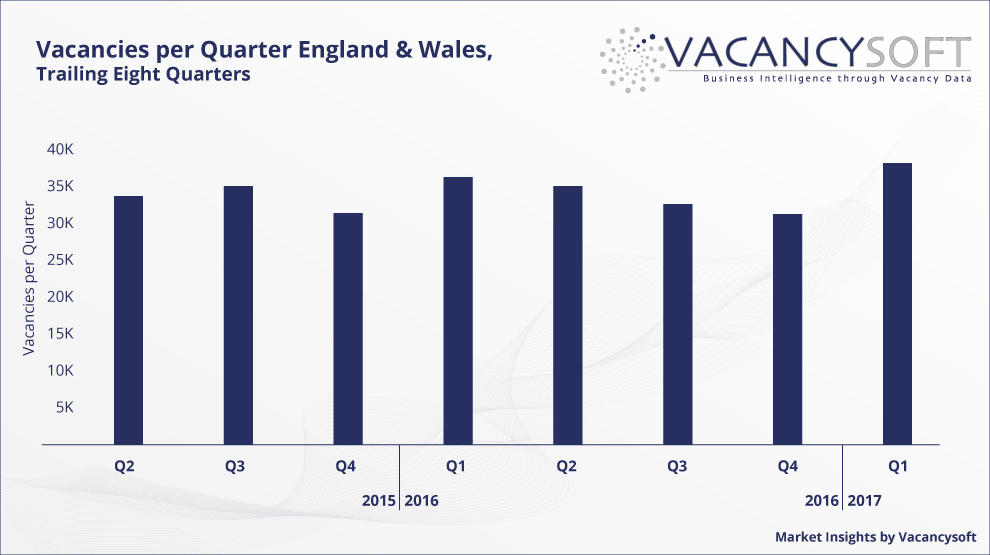 The first quarter of 2017 is over, and it has provided us with a taste of what to expect from the job market further on in the year. In England and Wales Q1 2017 was the busiest of the last eight quarters, with 5.4% more vacancies than we saw in Q1 2016, and 18.9% more than Q4 2016. Drilling down to the monthly data shows that March was particularly busy, with 10.7% more newly announced posts than March 2016; it was also 17.9% up on the monthly average from the past 24 months.

A market report released by Adzuna at the end of last month observed that the job market had reached a high level of saturation of opportunities, with that report describing the current situation as a “war on talent”. This means that most job seekers should be seeing a larger-than-usual range of employment options. The unemployment rate is at a record low, as covered by a recent Market Insight. Wage growth has stagnated in recent months, a pattern which could potentially be expected to be reversed this year, given that the demand for labour is close to outgrowing the supply thereof.

The Adzuna report underlines that growth in vacancies for HR roles, particularly those for in-house recruitment functions, is faster than that for other areas, in order to meet the needs of companies with regard to the job market. Vacancysoft’s data showed that between Q4 2016 and Q1 2017, HR vacancies increased by 17.2%, which was comparable growth to that for Accounting roles (up by 17.8%) and Legal posts (up 19%). The fastest growing profession in terms of growth in newly announced quarter-on-quarter was Banking, which saw a 40.8% spike.

How much the current activity will change once Brexit-related changes start to take effect remains to be seen. It seems that despite pessimistic forecasts, the effects of Brexit, which have been widely predicted to bring about a significant economic slow-down, have not yet fully kicked in.