The Midlands and Wales have been some of the fastest growing regions nationally, and over the last two years average monthly vacancy numbers have risen by 20%, compared to only 10% nationally. However, post-referendum chaos will probably cause the growth rate to decrease.

EU funding is key to this prediction. The regions are among the UK’s top beneficiaries of EU funds, and Wales alone receives £500m each year. This support has created 35 000 jobs there since 2007, with significant growth being seen in the Consumer Goods & Services (CGS) and Technology, Media & Telecoms (TMT) industries. This development is obviously vulnerable to shocks from the referendum result. 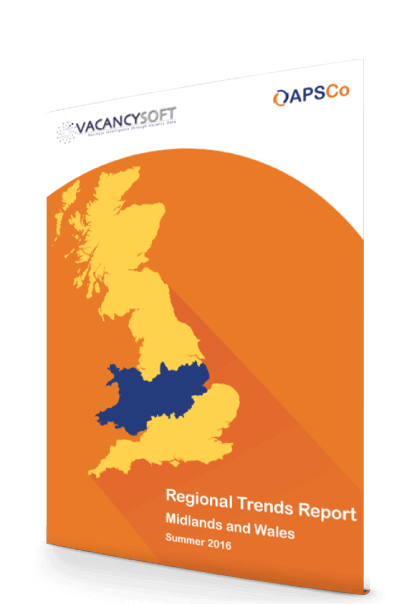 Indeed, the local economies in the Midlands and Wales are heavily EU-reliant. Estimates put the number of jobs in these regions at over 6.5m, of which 11% are built on trade with the continent. Over 40% of all their exported goods were sold to EU countries in 2015. As the new political landscape unfolds, this could become a challenge rather than an advantage.

Overall vacancies in this region reached a peak in August last year, and have been much lower since then, with the single exception of May. Much of this is due to pre-referendum fears putting immense stress on the local market. In the coming months we expect further stagnation as uncertainty and caution dominate business decision-making in UK businesses.

Every day Vacancysoft monitors careers centres on thousands of company web sites, and gathers links where there is change. These links are then classified automatically, and in the case of relevant content, by Vacancysoft staff.