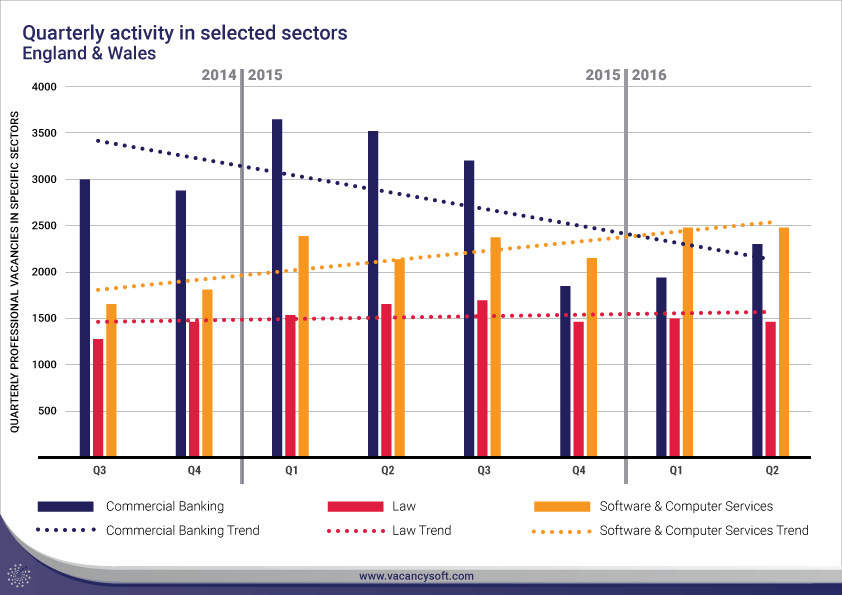 What can quarterly analysis suggest to us about hiring trends in the UK? What changes are forecast for the UK job market post-referendum? What is going on with the Banking Sector, and how will Law firms respond to the Leave Vote?

More than a week has passed since the Brexit shock.  While the dust is settling, it’s also time to review the second quarter of 2016.

The hiring trend in 2016 has been positive. The number of advertised jobs in sectors Vacancysoft tracks is down versus one year ago, but there has been a recovery in the last two quarters.

The most active sectors posting professional vacancies were Software & Computer Services, Commercial Banking, and Law.  The Banking sector was traditionally a leader in terms of hiring, and over the past two years, 16 % of all professional vacancies came from this sector. Its growth patterns stopped, and hiring dropped significantly, in the last quarter of 2015. Rehabilitation of the sector will take time, but we can see a slight pick-up of hiring over the last six months.

The long-term trend for the Legal sector has been flat, while hiring in Software & Computer Services has been increasing almost every quarter in our data. Salaries for IT professionals are climbing, employment is going up, and we are witnessing the rise of the Technology-driven economy.

But the current political situation in the UK brings huge uncertainty to recruitment patterns for the upcoming months. A recent article in City AM suggests that the process of transition may result in restructuring of the Financial Services industry in the UK, with many banks moving to other European countries. Massive redundancies, therefore, will have a detrimental effect on overall employment. Nevertheless, the situation with law firms is expected to be the opposite; we will see a surge in law firm hiring due to the environment of political and legal uncertainty.