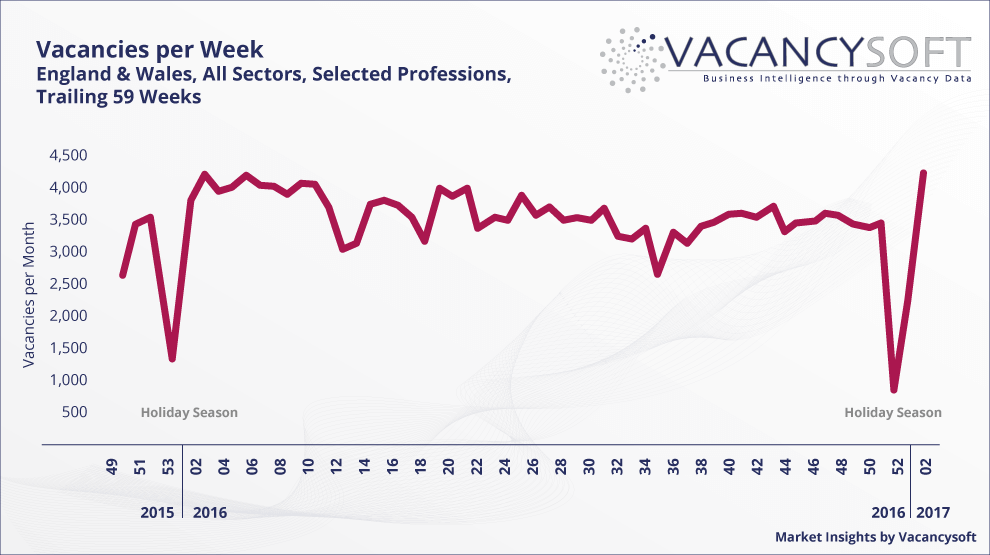 After the traditionally quiet holiday period, vacancy volumes are picking up again in January. A December survey by the Confederation of British Industry (CBI) suggests employers’ hiring moods are largely positive, with 41% of the surveyed companies anticipating an expansion of their headcount during the course of 2017.

Michael Saunders, a member of the Bank of England’s Monetary Policy Committee, has predicted that the unemployment rate will stay under 5% and the number of vacancies should remain at a record high in 2017. The most recent data from the ONS confirms this may happen, especially as the unemployment rate stayed below 5% in the three months between September and November 2016.

Looking at the vacancies advertised in the first two weeks of this year gives a forecast of what to expect in the near future: openings in the second week of January spiked to a 12-month high, mimicking the growth period in January and February last year. This means we should expect a busy period for professional vacancies in Q1, which potentially could continue into further months.

It seems employers are not worried that their hiring activity will be affected this year. That is in spite of Theresa May’s plan to trigger the Article 50 Brexit negotiations in March and her recent statement that the UK will leave the single market, a scenario viewed by business leaders as risky for the UK economy. Josh Hardie from the CBI has suggested that some companies may be trying to “lock down” high-skill workers, especially non-British EU citizens, as access to them may be more difficult post-Brexit due to immigration regulations. So it may be reasonable to expect increased hiring in the next few months at least.

← Data protection is changing; are you ready? How important is competitor analysis? →