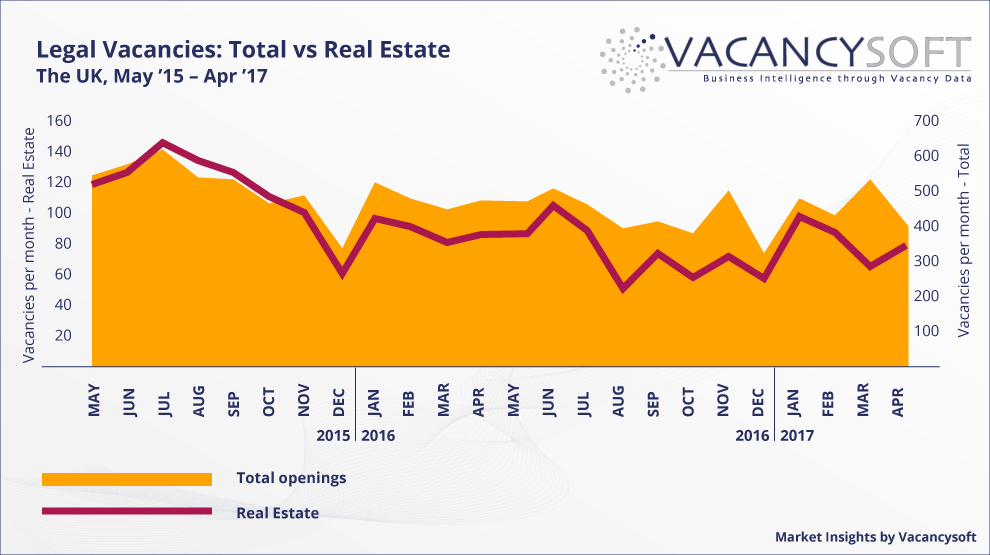 Developments a year ago prompted forecasts that Brexit would trigger a surge in demand for legal specialists to deal with “the largest demerger in history”. While the legal vacancy market does seem to be recovering somewhat after the falls in autumn of 2016, we are seeing differences in the levels of demand for some of the more popular practice areas as compared to the situation before the Brexit referendum.

In terms of year-on-year change, Legal vacancy volumes were down by 12.1%. Private practice openings (which accounted for 76.5% of all new legal posts in the 24-month period under review) fell by 16.8% year on year, while in-house roles grew by 5.3%. This trend, as covered in a previous Market Insight, is likely to be connected to economic volatility in some key practice areas, particularly regarding London, such as Real Estate and Finance. The number of vacancies nationwide in Real Estate fell by 26.8% year on year, and the number of openings in Finance was down by 23.6%.

In London, openings for lawyers decreased by 16.8% year on year, but openings in the South East grew by 7.3%, illustrating the broader trend of business spreading away from the capital city. London specifically saw a year-on-year fall of 26.1% in the Finance practice area and 40.8% in Real Estate, which were both decreases that were much more pronounced than those at the national level.

The number of openings for lawyers specialising in Real Estate, the busiest practice area (accounting for 20.2% of new openings in the 24-month period under review), saw rather different changes to the trends in total vacancy volumes throughout 2016, especially in the second half of the year. Key months included: August 2016, when Real Estate roles fell by 38.6% month on month, compared to a drop of 16% in total volumes; and March 2017, when the overall market grew by 24.7% month to month but there was a 23.5% month-to-month fall in demand for Real Estate specialists.