The London job market in April

The London job market in April 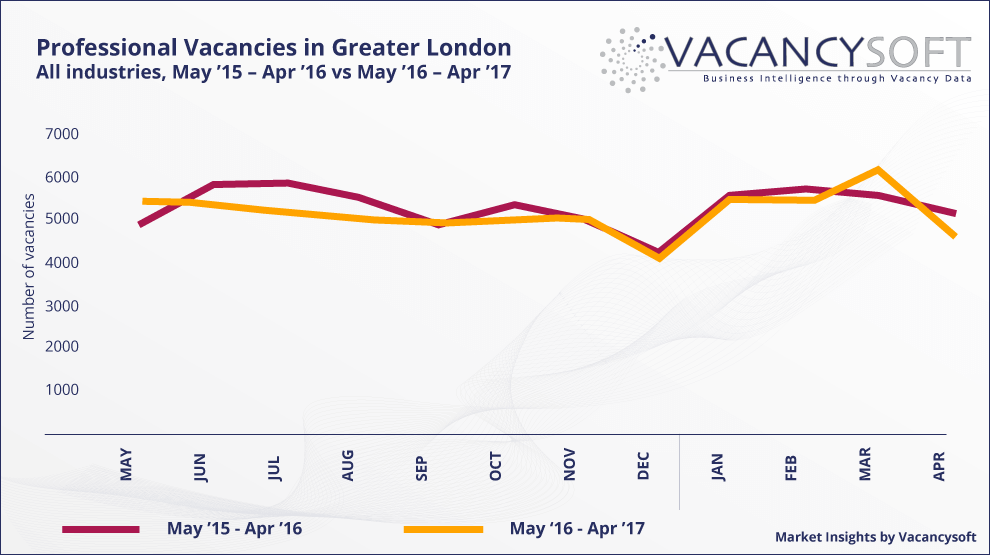 Professional vacancy levels in London have displayed a significant degree of volatility in recent months. Q1 2017 had the highest amount of activity of the last eight quarters and March 2017 was the best month in the last 24 months. However, excluding December 2015 and December 2016, which both suffered from the traditional holiday-related drop-offs in activity, April 2017 was the worst single month in the data in terms of of vacancies. The month saw 8.9% fewer vacancies in London than April 2016, and 23.7% fewer vacancies than March 2017, which was the largest fall in the 24-month period under review. This fall was not specific to London: vacancies in England & Wales overall fell by 22.2% between March and April.

While the April bank holiday could have been a factor in this drop, it seems that such behaviour may be expected given this market’s current volatility. Other developments that might affect future vacancy levels in London may include key players in Financial Services confirming intended staff relocations to the continent, and the recent crystallisation of Brexit negotiation plans. London businesses expressed concern about Brexit affecting their importance as “the engine of the UK economy”, with the London Chamber of Commerce and Industry recommending, inter alia, that the authorities allow current EU workers to stay on in their positions. Meeting the needs of a growing population, set to surpass 10 million by 2030, and a shaky real estate market is yet another challenge London must face to retain its key position in the UK, Europe and the world.