What are the hotspots in the South East?

What are the hotspots in the South East? 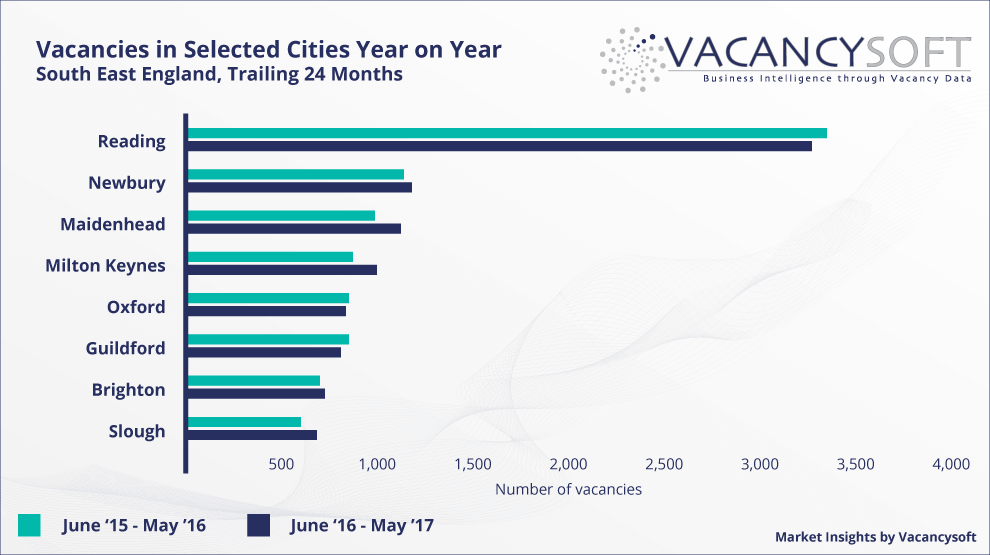 South East England has the largest population of any of the UK’s NUTS regions. It also has the second highest employment rate in the country, at 77%. In terms of vacancy data, the region had of 3.53%, 12-month period on 12-month period, in May 2017; by comparison, vacancy volumes shrank by 0.9% in England & Wales overall.

Continuing the broader trend of vacancies moving outside of London, a number of mid-level cities and towns in the South East experienced period-on-period growth. Of the top 20 cities in the South East in terms of of openings, only five saw drops in vacancy volumes between 12-month periods, while hotspots such as Maidenhead, Slough, Milton Keynes, and High Wycombe saw increases in excess of 14% 12-month period on 12-month period. In those four cities, the leading sectors included Software & Computer Services (with a 35.8% increase in openings 12-month period on 12-month period) and Pharmaceuticals (27.9%). Those numbers were higher than the proportional change in the region overall, where openings in Software & Computer Services grew by 10.1%, and in Pharmaceuticals by 17.3%.

Reading was the top city in terms of vacancy volumes, with 6,612 openings recorded over the past 24 months. Interestingly, Reading-based vacancies decreased by 2.3% 12-month period on period. Meanwhile, the region’s second city by vacancy count, Newbury, had just a third of Reading’s volumes but experienced 3.6% growth between 12-month periods.

Openings for IT professionals in the South East shrank by 4.6% 12-month period on 12-month period, while demand for Marketing and Sales staff was buoyant, with growth between 12-month periods of, respectively, 14.4% and 21.1%. Vacancy patterns over time roughly those in England & Wales overall, decreasing gradually throughout 2016, and spiking in early 2017. Vacancy levels reached a 24-month high point in March 2017, with 2,243 new jobs advertised in just that month, only to drop in April to levels which were the lowest since December. May was again busier, with vacancy activity equal to that seen in January and February.