Why a no deal Brexit would be the real betrayal 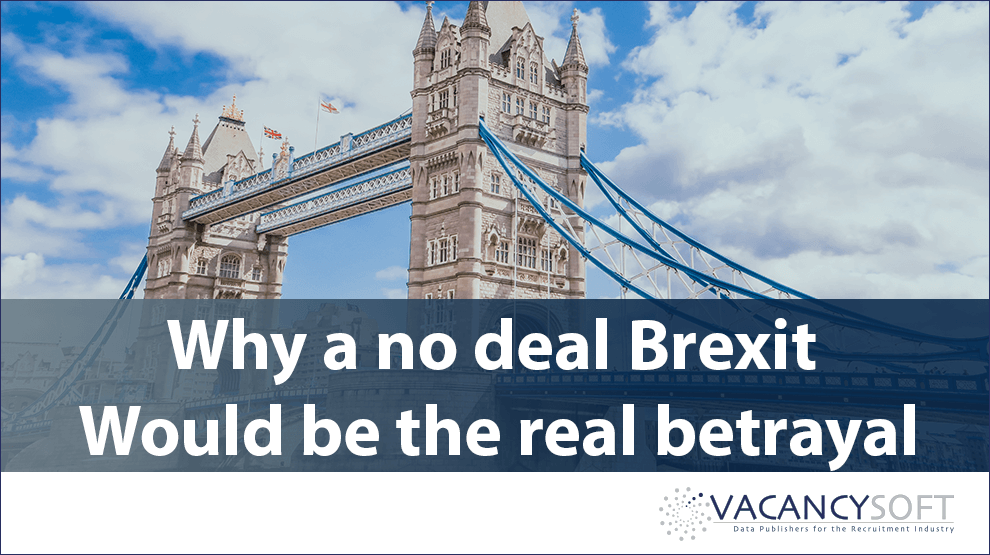 It is fair to say, democracy can only function if the result is respected. With that, despite the many reasons why the UK would be better served by remaining in the EU, the democratic principle trumps everything. There may well be good logical reasons for a second referendum, equally for those that want that to happen, either way the result would do nothing to heal the nation, as it would only result in even greater bitterness and rancour, where the end result would be a divided country for another generation.

However, it is important to remember that when people voted to leave the EU, they were promised an incompatible wish list. The economic benefits of single market membership along with independence from the EU. Factor the governmental industrial economic strategy since Maastricht has been about enabling the UK to be the entry point for non EU multi-nationals into the single market. Now with this membership in question, already jobs are at threat. Honda is shutting down in Swindon. Nissan have closed down one line in Sunderland. As a result car manufacturing is down 45% year on year and that’s just automotive. Take the aerospace industry in Bristol, which is now facing an existential crisis, if sat outside the EU single market. Indeed every industry is facing its own challenges.

Then factor the sheer duplicity of the claims regarding trade. As seen by a recent report in the FT, the reality is a free trade deal with the USA would do little to benefit the UK, as the UK already runs a significant surplus. Instead it would mean higher costs of drugs, a privatised NHS and chlorinated chicken. All red line issues for the US in a trade deal, as stated by their ambassador. The only protection from that is single market membership.

Factor that with the single market, there have been no substantive changes to the rule book since Maastricht (so twenty years +) meaning that a significant part of the debate over sovereignty is hypothetical. i.e. if the rules were agreed and never changed, what does it matter? Given the amount of jobs in the UK dependent on single market membership (est 1m+) is it really wise for the UK to sit outside it? Direct foreign investment is falling, meanwhile recruitment is stalling. In some sectors job flow is now down over 50% year on year as companies sit on their hands, whilst the UK determines its next steps.

So what is the solution? Firstly, we need to go back to the referendum we had and remember that it was 52/48, meaning that a compromise where the UK leaves the EU, with the minimum disruption / change possible, is the only fair outcome. There is a solution for this already in place, the UK only needs to leave the EU, and join the EEA. With this we would see:

The next Prime Minister needs to reflect that the bravest solution for the country is this. Lance the boil of the Brexit party by taking the UK out the EU, but do it in a way where the economy continues unaffected and actually with the EEA solution, could even be better off, than remaining.