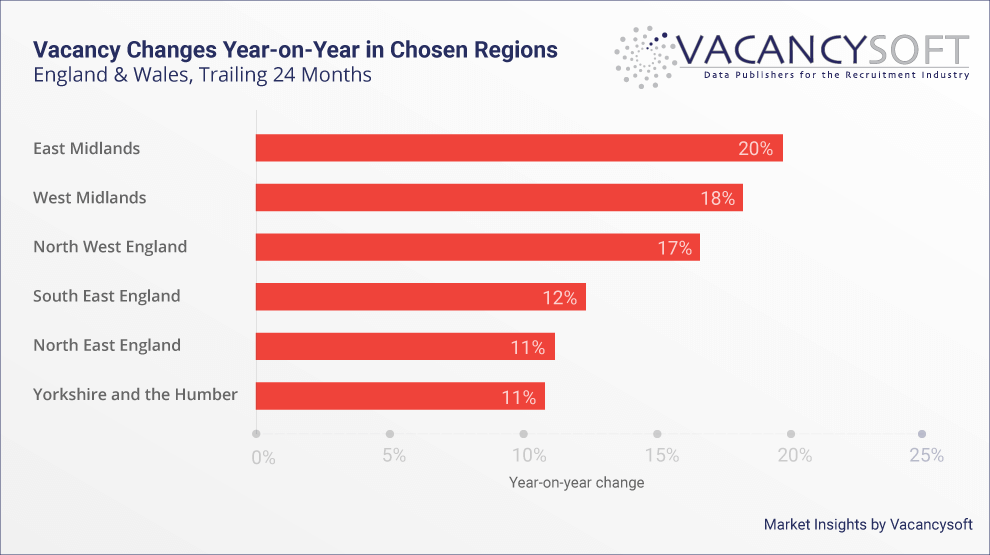 Research published in August by the Resolution Foundation found that interregional work-related mobility is shrinking in the UK. Combined with the increasing regionalisation in various sectors that we explored in other insights, this leads to the assumption that more roles are being filled using locally sourced talent as opposed to relocated staff. From the job seekers’ perspective, this essentially means they can find more jobs suited to their qualifications and expectations in their vicinity than a few decades ago.

Professional vacancy data is showing strong year-on-year growth in a number of UK regions. Most notably, the Midlands are experiencing over 18% more new vacancies in the past 12 months as compared to the 12 months before that. New vacancy volumes almost doubled in the Banking sector in the Midlands between years, with increased hiring led by major market players such as HSBC and Barclays.

The North can be pinpointed as another hotspot, with vacancy volumes for the North West growing by 16.7% between years, the North East by 11.3%, and Yorkshire and the Humber by 10.9%. This activity contextualized the Northern Powerhouse project, an effort to boost economic development by building hubs outside of the South East and London. Indeed, the South East and London, despite accounting for the largest numbers of net vacancies, when ordering all regions by change they come up fourth and seventh, respectively. When considering the professional vacancy market in the English northern regions, sectors with the largest year-on-year change included Accountancy and Banking, both seeing increases by over a third. Manchester was the top city in the area, up by 22.3% year-on-year, followed by Leeds, up 15.5%.

Following these trends, regional jobs in finance or tech are increasingly becoming attractive opportunities for high-end professionals, compared to London where higher salaries are outweighed by ever higher costs of living. Benefits of working in the City can be countered with factors such as flexibility and comfort, as highlighted for the legal sector; regional vacancies for legal professionals saw year-on-year growth by 10.5%, compared to 5.3% in London. Along with the regionalisation of key industries, we may yet see a future where graduates from regional towns can easily stay put without significantly affecting their career prospects.