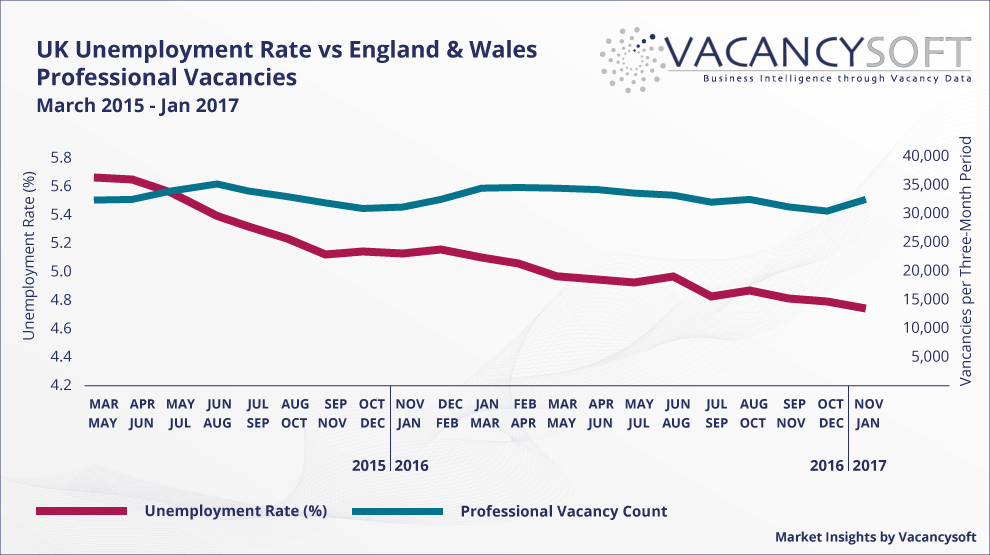 While market forecasts these days mostly make for grim reading, each of the last few months has brought quite good news from the ONS: the unemployment rate has been continuously falling. In fact, the UK has not seen a lower rate since 1975, with unemployment dropping to 4.7% in the period between November 2016 and January 2017. And that’s not all, the ONS reports in its latest statistical bulletin that “the employment rate (the proportion of people aged from 16 to 64 who were in work) was 74.6%, the joint highest since comparable records began in 1971.”

Professional vacancy trends are considerably flatter than unemployment rate trends. However, after a year of a measured decrease in 2016, professional openings grew by 3.4% in the three-month period ended January 2017 compared to the three-month period ended December 2016. This may be a sign that the professional job market will be growing further in the near future: February 2017 had more significant levels of activity than is normally seen in that month.

But what are the downsides of this situation? Firstly, year-on-year wage growth slowed to 2.3% in the three-month period ended January 2017, down from 2.6% in the previous three-month period. Secondly, as Ian Brinkley from CIPD pointed out, “the number of migrants in work continues to edge down, especially those coming into the UK from the A8 countries, suggesting that continuing uncertainty about the future status of EU citizens in the UK is already having an impact”. The Times wrote about the Battersea Power Station project as an example of foreign construction staff who are already leaving the UK due to Brexit-driven uncertainty.

While generally optimistic, this market behaviour should not be overestimated. Doug Monro from Adzuna said that “the UK can bask in the glow of the current employment climate, but we must be wise to how quickly things can turn”, referring to the predicted future of the UK construction industry in a scenario where the UK leaves the single market.